This was supposed to be the first part of a series of updates on the my training for the Pistol 50k (31 miles) which I am running on January 2nd 2016 in memory of my late Taekwondo instructor/mentor James Rich. However, some how time marched on (and on and on) and so it is now a single training recap.

I had wanted to start training a little earlier than I did, but sometimes life gets away from you. Or rather, it confuses you as it runs away FROM you. (The older you get the faster it seems to move.) Then when you stop to look around, you say “[expletive of choice]! Where did the time go?” That was me. I had wanted to “officially” start training on August 1st in anticipation that I would be representing my District in the blockbuster hit: Flying Monkey Marathon X, May the Hills Be Ever in Your Favor. Each year, the race has a different “theme” and the one for 2015 race was based on The Hunger Games series.

The premise is that I would treat the Flying Monkey Marathon on 11/22/2015 as a training run. Ideally, I would run ANOTHER marathon maybe as another training run in early December. The Rocket City Marathon on Dec 12th was a great candidate because it was relatively close (Huntsville, AL) and it is a flat course. So after the undulating hills of the Flying Monkey (Nashville, TN) it would be a nice scenario to attempt a Sub-4hr marathon. However, there was a failure to launch for Rocket City and the elusive Sub-4hr attempt would have to wait.

The Flying Monkey marathon is very popular for those runners who like hills that hurt you. For the past couple of years they have used a weighted lottery to choose who be running. Apparently there are enough crazy people who want to run that they have to limit the number. While the actual weighing of criteria is an ancient Chinese secret, it is possible that someone who has run the Monkey multiple times (I had run Flying Monkey 5 times previous) could not get a spot. Fortunately for me, the lottery went in my favor and I was going to The Monkey Games.

In mid August, I started to feel sick, but it never lasted more than a day or two and the symptoms changed. There was overwhelming fatigue one time, a super sore throat another, neither of which was accompanied with a fever. Without having a fever or chest congestion, I thought it might be allergies. In early September, almost 2 weeks since my initial symptoms, when I still felt bad with new symptoms, I decided that I would go see the doctor. Turns out, whatever “it” was decided it would turn into pneumonia.

I have had pneumonia multiple times, and there are certain warning signs that throw up Red Flags that I am on my way to getting (or already have) pneumonia. However, none of the ailments presented themselves like they were supposed to, so only because they wouldn’t go away did I seek counsel on what was going on.

As a result of my diagnosis, I went on antibiotics and took a 9 day hiatus from both running and Taekwondo. Training suspended.

Damn the 10% Rule, Full Speed Ahead

By the last few weeks of September, I was healthy again and ready to “restart” my training. At this time, I was already 6 weeks behind on my training for Flying Monkey, but I still had enough time for The Pistol. I decided that I need to take some big leaps in training to try to “catch up” or rather “not be too far behind” in my training.

There is a Rule of Thumb in running called “The 10% Rule”. It suggests that you should increase the length of your workouts (overall mileage, long runs, speed workouts, etc.) by 10% from week to week. The premise is that this progression helps the body transition to the rigors of the longer runs (or faster workouts) better without exposing one to injury. It is also one reason a marathon training program lasts 16+ weeks or more. Build the mileage up step by step, mile by mile.

With 8 weeks before the Flying Monkey and my longest run of my training a whopping 10 miles, I had to push the limit a little. Disclaimer: As a seasoned runner, I have a good feel for what I can and cannot do when it comes to running. This won’t work for everyone.

I started with a 13.5 mile long run at 8 weeks out. This was followed with a 13.3 mile run the following week. Then at 6 weeks out I made the big jump with a 23.4 mile run. Normal training program has a “Recovery Week” after a very long run, so my run at 5 weeks out was supposed to be around 16 miles, but I only ran 2 because I had some problems and I didn’t want to be that far from home.  So I took 5 weeks out as basically a Rest Week.

4 weeks out was a 18.6 mile run. However, the next weekend, which was Halloween, I was just too busy for a long run and recorded 0.0 miles for my long run. This trend continued and I didn’t have anymore long runs before race day. I was able to get a handful of 4-5 mile runs in during the week. Also, I was going to Taekwondo class multiple times a week, so it’s not like I was sedentary.

On November 22nd, I ran Flying Monkey in just under 5 hours. As I mentioned above, this was a training run, so I wasn’t trying to run for a certain time. I haven’t written the Race Report for Flying Monkey yet, but I’ll go more into details there.

The Flying Monkey was 6 weeks out (that Magical Week) from The Pistol. I didn’t come away from Flying Monkey unscathed and my chiropractor put me back on the right path the Monday after.  The next weekend I took as a Rest Week (5 weeks out). It was Thanksgiving and we were out of town. I almost decided to run a 10k but decided it would be better to rest than to race. Tough decision to make but never underestimate the power of a rest day.

With it now being December, just 1 month left before Race Day, I took another Rest Week. Also at the beginning of December, I tested (and passed) for my Second Degree Black Belt and didn’t want to be distracted from what I needed I to do to earn it. 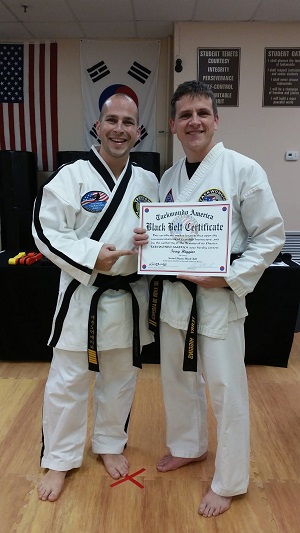 Me and Mr. Church at awards night with my brand new 2nd degree Black Belt

The next weekend, 3 weeks out – Dec 12 (when I had wanted to run another marathon), I ran 24.3 miles. I decided I would run from my house to Eddie’s Health Shoppe (about 8.3 miles away) where I would meet up with the Knoxville Marathon Training Group and run with them (6 miles) and then run home (around 10 miles based on the route). It ended up being kind of fun. I ran a little faster than normal going to the training group as I didn’t want to be late. Then ran closer to my 10k pace because I ran/talked with another running for 3 miles, but then was slower for the last half of the run.

Since the pattern of a 20+ mile run followed by a rest week seemed to work fairly well this training cycle, I decided that at the 2 week out point, I take another rest week.

So it is 1 week before the Pistol 50k. The rain that we have been having has moved on and I’ll get one more long run (about 12 miles or so) in before Race Day. I’m also going to try to get in 2 mid-week runs of about 4 miles. This helps with the nerves during Race Week when the looming race is only days away and the anxiety of the unknown envelopes me.

It’s time now to get into #WarriorMode !

Marathoner, A Terry of all trades
View all posts by planet3rry →
This entry was posted in running and tagged flying monkey marathon, marathon training, pistol ultra, pneumonia, taekwondo, warrior mode. Bookmark the permalink.