Getting to the start line of the Pistol 50k will require a lot of work. I’ll be building my training program for it shortly and will have some key milestones. One of which, I hope, will include the Harpeth Hills Flying Monkey Marathon.

Entry into this race is a weighted lottery. “What is a weighted lottery?” you ask. It’s where you name is tossed into a pool of entrants and certain “things” about your application increase your probability of being selected. One of these “things” is how many Monkeys you have run, more the merrier. I also think wit and sarcasm weigh in your favor in the “For goodness sake, why would you do this? Are you insane?” question.

Of the many cool things about this race, one of them is the theme. Each year there is a theme which influences the t-shirts, posters, goodies, and more. For example, for the 4th year, it was ‘A New Hope’ theme. You’re a nerd if you get it.  The runners for the 2013 “Faster than a Flying Banana” theme received a cape. Forget what Edna says about capes… it was still cool. Some even ran the marathon with their’s on. Last Year, the theme was Game of Thrones… and I missed it! This year, the theme falls under the Hunger Games with the motto  “May the hills be ever in your favor”. 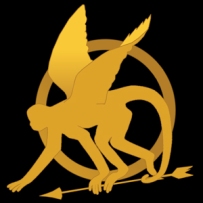 However, for this course, “hills” and “favor” don’t really mix. This is a description of the course by Mike Sohaskey at RaceRaves:

And while the organizers may take themselves lightly, they clearly take their responsibilities seriously with over 7,200 feet of total elevation change, grades of up to 12% and a cadre of dedicated volunteers providing encouragement and guidance along the way.

With landmarks like “Three Mile Hill” and “Nine Mile Hill” boasting lung-burning ascents and quad-punishing descents, the HHFM isn’t monkeying around. Or maybe it is. In any case, your legs will doubtless be ready to See no hills, hear no hills, speak no hills long before reaching the finish.

Maybe to go along with the theme I will make my running shorts out of fire. Ummm, maybe not. Hopefully, they won’t have any Nightlock Gels out on the course.

Marathoner, A Terry of all trades
View all posts by planet3rry →
This entry was posted in running and tagged flying monkey marathon. Bookmark the permalink.

4 Responses to Here Comes The Monkey