It was in the mid 90s today with a feels like 98Fish and I know that this is nothing to get excited about it. Trust me, I’m sleeping as I type this. However, the guys at work love this stuff. So in the morning, I get the lowdown on the forecast for the day. Mid 90s, Chance of Rain 30%.

And that’s what it was like until 3pm when there was a sudden clap of thunder and it was still bright outside. For the rest of the afternoon, it was speculation on what was going to happen. The chart showed big red sploches on it, but it wasn’t cloudy. 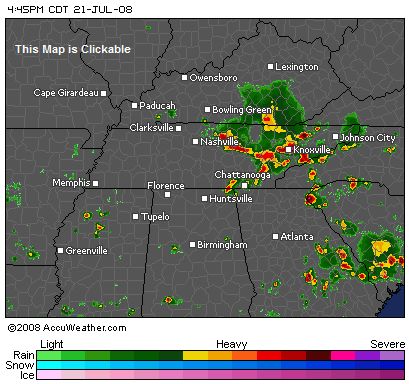 Around 5pm, it got a little bit cloudier and the wind picked up. I left work and in 1/4 of a mile it was pouring rain.

And like the weather in East Tennessee, it can be pouring down raining at one place and dry just a few miles around

I stayed on the Interstate for quite a while. I wanted to go to the Kroger because there is a creek that gets Freaky Wild when it rains and so even though I didn’t have Stella, I wanted to get pictures or video. Just so happened that My Lovely and Talented Wife called and I went to Kroger on a dinner run. While I was in the store, the storm passed, but there was some lightening action going on when I came out.

After being that “Weird Guy filming in the Parking Lot” for a few minutes, I did get some lightening on digital.

Marathoner, A Terry of all trades
View all posts by planet3rry →
This entry was posted in Life In General and tagged video, weather. Bookmark the permalink.