I was coming off the disappointment of a not so spectacular race. I wasn’t injured, but I was still wondering why. The self analytics soon faded to a faint memory as I was heading over to a new location to do some trail running. My friend Beth told me about this place at Expo and I thought I would go scope it out. It’s a Freaking GOLD MINE!

The location is just past the Island Home neighborhood in South Knoxville, the parking lot for the Forks of the River area is not in the best location but it’s safe enough. I wasn’t too concerned with human predators as I was with the wild boar. Beth mentioned in her email that TWRA had been out there looking for a wild boar. I even went to Walgreens to try to get a thing of pepper spray, but that was something they didn’t sell. I thought about getting a lighter and a can of aerosol hair spray, but that might lead into bigger problems if I encountered the wild boar.

Beth sent me a hand drawn map of what she knew and the course looked really cool. I especially liked the part about “Too Swampy”, you can’t go trail running without getting muddy or bloody!

I was wired up with my iRiver, as I was recording audio for an episode of Gravity that would highlight the Forks of the River. I was also carrying my hand held Olympus Camera and the map. I had everything and I was ready to go.

The trail is awesome, you start out on a gravel road and then peel off into this field. The grass is about waist high and you follow a tractor trail until to crest up one of the hills. I thought for sure that i would run into a snake or two, so I had my camera ready! Nothing….

One you are up the hill, the tractor road turns into a jeep/service road, but from here there are many trailheads that you can take. So I am following my map. The first section takes you to one of the terminus of the Will Skelton Greenway, which makes this even cooler because you could make this a super duper long run, by utilizing the Greenway and then the trails.

So I am following the map, making my way around the area. The trails are established but the trees overhead are long in some places, even places that I saw bike tracks. I discovered a section of trail that wasn’t on the map and tried to etch the new trail on the map so that I wouldn’t forget if when I made it home.

I headed out of the first section, back on to the Jeep Road and across to the area where I was most excited… “The Swamplands”. However, shortly off the Jeep trail, I came to an opening where I saw 3 other trail heads…. but which one to take. The map wasn’t drawn to scale and there was a disclaimer on it, so I can’t fault the map. So I made my choice.

I started following my selection and it was fun. There were spots where the trail was over grown, but I would find runner, deer, dog, maybe bear, maybe wild boar tracks assured me that some form of breathing creature frequented this place at some point in time. The trail enters back into a wooded area and I run up a hill and the trail “T”s.

Crap. My map, doesn’t show the trail coming to a “T”. It suggests that one area may have a turn with a orange flag, but not a legitimate “T”. Well, what do I do? After talking to you on the iRiver, we decide to turn right and proceed up the up hill. Not 0.1 of a mile and there is a downed tree blocking the path. Nice.

Not only does the tree block my path but it viciously attacks my knee cap when I walked up to it. It was like a scene from Poltergeist, except without the kid, the freaky clown, a sister, ghost, a tree with arms, rain, being at night… okay maybe it wasn’t quite like Poltergeist. But now, I am totally lost. My map is useless at this point, I am very thirsty, I’m bleeding… and I have about 2 hours until sunset. At least THAT was in my favor. Had there been someone around, even being a guy, I would have asked for directions.

As I am typing this, why didn’t I just backtrack? Too easy. actually, it was probably a combination of dehydration and not being in the moment to really think of what I should do… but what I decided was to take the other leg of the “T” and see where that went. I gave myself 5 minutes, else I turn back and retrace my steps.

I was went out on that leg for about 3 minutes, just as I was about give up, I saw a “XTERRA” sign posted to the tree. Forks of the River was the site for one of the Xterra Races recently and there was a sign. I figured that it would lead me closer to civilization, I hope!

I followed the trail around and it led me to a… fallen tree. Hmmm is this the same fallen tree and all I went was in a circle? No, it wasn’t the same tree that ate my knee, it was in fact acting as a door to the Jeep Road. But which did I go? Gaging the locatoin of the sun, I chose to go off in a northernly fashion. I was thinking that it would take me back to where I had ran earlier and I was RIGHT! I found were I was and knew how to get back. Success!

I made it back to the car and although I messed up my stopwatch, the time on my iRiver was 1hr 26 minutes, so given about 16 minutes of stopping, contemplating being lost, taking pictures and looking for wild boar tracks, I decided that I ran 1hr 10 minutes. I know that I am not a speed demon out in the trails, so to be conservative, I figured a 10:00 min pace would be nice and make the math damn easy. So, without having to use Calculus, I ran approximately 7 miles.

I am very exited about going back there and exploring some of the other trails out there. Here are some of the pictures that I took while I was running.

Forks of the River Map, PDF 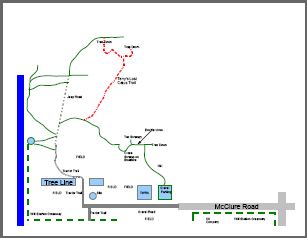 Marathoner, A Terry of all trades
View all posts by planet3rry →
This entry was posted in running and tagged forks of the river, trail run. Bookmark the permalink.