I was chatting online with one of my best friends from college and he sent me a PDF article from American Fencing Magazine about his cousin’s son (Nathan) who has Asperger’s Syndrome and also fences. Not as in White Picket but as in “ENGARDE!” type fencing. 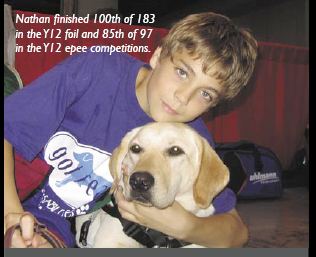 Nathan’s story is unique because of (what I guess) is some sensory issues associated in conjunction with the Asperger’s, running his hands through his service dog’s fur (the sensory part) helps lower the anxiety of being in the fencing arena (Aspergers). The Elder has a similar tick, which is pulling strings… which would NOT go over well with getting a service dog. The Loud and Lovable Skipper Doodle has enough to worry about just getting his tail pulled.

It’s pretty awesome that Nathan is participating in a sport that demands such physical coordination. Typical Aspergians have normal to poor body control which is why they are deemed “clumsy” or “uncoordinated”. To participate in this sport that requires precision is not only fun but also great therapy. Also, this type of sport is great because it gives him the atmosphere of competition but he doesn’t have the baggage of playing on a team sport. Sure, he has his own anxiety, everybody does, but for Aspergians “fitting in” on the team is often more difficult than not.

In the next episode of my running podcast Gravity@1053′ I am going to talk about why I think that running, especially marathons, is a perfect fit with my Aspergers. I’ll be publishing it on or near March 3rd. Plus, fencing will be coming to the forefront of the world this year. Okay, maybe not the forefront, but it’s part of The Olympics and this is An Olympic Year. Here’s the website to U.S. Fencing, in case you want to figure out what Passata-sotto is (hint: It’s NOT a new dish at Olive Garden)

Marathoner, A Terry of all trades
View all posts by planet3rry →
This entry was posted in aspergers and tagged aspergers, nathan selove. Bookmark the permalink.