Thank you for everyone who wished me a happy birthday. Although I didn’t do anything wild or crazy, it was a great day. My mom came over and we ate a bunch of Sushi and had some Grolsch (but not at the same time). I also had a conference call for the Phedippidations WorldWideHalf Marathon which is coming to fruition and will be happening on Oct 7th & 8th.

I have a few things that I have been meaning to blog about and wanted to “get them off my chest” sooner, rather than later. So, if you are scaredy-cat when it comes to spiders, you’ll not want to do much further. I think Stacie might scream like she’s being attacked by kamakazi ducks, but my cute litle spider friend has become a neat “addition” to the house. But first, let me start off with some shameless self promotion and present to you the hardware that I received at the Farragut Fall 5k last week for being a fast mofo in my age group. 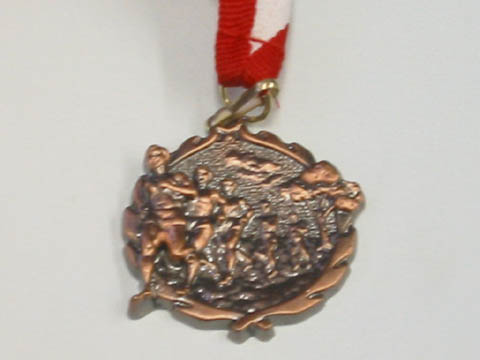 and on the back it has the 3rd place stuff etched into it.

“Spider, I promise not to kill you”

okay, here is my 8 legged little friend who keeps my front porch clear of some insects. Actually, he gives, me some insane photography shoot material and I wanted to make a video for YouTubesday of him stringing his web. It is amazing. Oh, and I didn’t check under the spider’s legs, so it might be a girl, I don’t know. I don’t have the fancy scientific name, so let’s go with (creepious crawlous biggeous) He’s been around for a while, but we’ll see how long he stays while as the weather gets colder.

This picture was taken last weekend when we got a bunch of rain, the web hung around for some of the time before the wind just took it out. So, if you get the Heebee JeeBees… avert your eyes.

Marathoner, A Terry of all trades
View all posts by planet3rry →
This entry was posted in Life In General, running. Bookmark the permalink.

0 Responses to Odd and Ends