It was rather cold in the wee hours of the morning. Although most of you were cozy in bed, I was stressing out on how many layers and of what fabric composition I was going to wear for the race. Too cold and I wouldn’t be efficient, too hot and I would expire like a match. I had to find the Goldilocks Interval where my clothing layers would be in the “green zone” for the amount of exertion I was anticipating for the race. I ended up doing a 2 layer LS Coolmax shirts, cotton compression shorts, Umbro shorts and wore a jacket and sweatpants as “just in case” layers.

The night before I had laid out my clothes (ref: Phedippidations Episode #28) and was ready to go. I had my Peanut butter bagel for breakfast, when to the bathroom and then grabbed my stuff and headed out. During the 30 minute drive to the race start, I listened to Phedippidations #029 which was about Emil Zatopek. I’ll try to post more about Emil in a future post. He was a VERY accomplished runner in the late 40s and early 50s. He won the “Triple Crown of the Olympics” where he won gold in the 5k, 10k and marathon! This would help me around mile 7 of the race.

I was at the race a whole hour before the start time. This uncommon event allowed me to warm up for about 2 miles before I headed back to the car to ditch my extra layers and grab a swig of gatorade before heading over to the starting line. While at the car, Solange passed me and said hello during her warmup and sure enough, there was Marty aka Beer Boy was doing a warmup run. So, I ended up catching up with him and worked out a little bit more before we headed to the race start.

Before every race, we play the National Anthem. Now it’s usually just a recording, but this time we had a live singer of the national anthem and it was awesomely performed! I was still worried that I wasn’t going to have enough clothes on for the race as I was still pretty cold. It was supposed to warm up a few degrees so I stopped worrying about it and just took off. The plan that Marty and I had developed was that I would run with Marty until I couldn’t stay at that pace and then he would go ahead and finish. So basically, I was his pacer for the race. We planned out that we would run the first mile slow, a 9:00 min pace and then pick up the pace to a 8:30 pace and see how that worked.

Calhoun’s 10 miler in known for 3 things:

There was a group of 5-6 of us that knew each other, one way or another… and were actually being rather obnoxious. At the crest of hill at Mile 1, I commented as saying “Good thing we don’t have to run back up this hill”. I also gave warning to all the 10 milers around on “How NOT to run a 10 miler” (ref: Chickamauga 10 18 miler). So here’s the deal with the “Calhoun’s Moral Buster”:
When you approach it, the hill is a 12% grade, but it’s rather short at 637 feet. On the way back… at mile 9, it’s an average 5.5% grade over 0.3 miles and the last 400 feet is 6.5% grade! Also, they made it very convenient for the runner… at the top of the hill is a cemetery for when the hill kills you… runners of past Calhoun’s race that didn’t make it are buried there. Everywhere else on the course is either “gently” rolling or semi-flat (There is a difference here in East Tennessee).

Just before we started up the hill, I had a bad sign – in fact it’s a sign of running doom… hunger. And just not hunger in the belly, but wanting to talk about eating… that’s the catch. In marathons, when you start talking about food and what you are going to eat afterwards then you take focus away from your running and that’s one of the first signs of getting close to The Wall. Talking about the big rack of ribs, or the chocolate cake, or the huge helping of ice cream that you are going to eat as an reward for this endeavor leads to the realization that you are hungry and can lead into thinking about all the things that are starting to go wrong. So, on the hill, I tell Marty that I am ready for cake!

We ended up having a faster 2nd mile, mainly due to the long downhill. Mile 3 had the waterstop in it, so I decided to take the one Clif Shot gel that I brought with me. That helped out, a lot, and I never felt hungry after that. Mile 4, we both felt pretty strong and consistent. It helped that this was the flatest part of the course. At the mile 5 turn around, my split time… if I ran even splits, was on PR pace. My faster unofficial on a certified distance PR time at that! We stopped to stretch just after mile 5 at the water station. By mile 6, I could feel the first signs that my tanks were starting to run dry. At mile 7, my hamstrings were very uncomfortable and I knew that I wouldn’t have enough for the hills at miles 8 and 9, maybe not even get there. So I thought… What would Emil Do? So, I ended up changing my stride and in about 50 feet, my hamstrings were no longer a problem. I had changed my stride (lengthened a little) so that my hamstrings did less work and gave them a break. That right there bought me another 1.5 miles. By Mile 8, Marty had left me and I was running by myself. I had to walk up most of the hill to mile 9, I felt that conserving my precious energy now, would help me on the flat area for the last 3/4 mile. I stretched at the top of the hill. I was so worn out in the last 3/4 mile that I was walking again by the 1/2 mile mark. A runner behind me gave me some encouragement and in a few seconds, I caught up with him. I told him that I was going to borrow some of his aura.

Well, it worked. In a move to avoid traffic, I surged ahead and rounded into the parking lot for the last 0.2 of a mile. As I was getting closer, there were runners on either side encouraging us as we headed home. I saw a runner (Arvel Debty) in front of me and I was judging that he was right on the borderline of me being able to pass him. Had I had more gas, I would have gone for it, but I didn’t. Just after decision, a spectator told me that I had a someone closing fast on me. No way jose, this is a “race” and not a “run”… so, I picked up the pace as best as I could and sprinted toward the finish line. I almost caught Arvel before me, but in the last 15 feet, I eased up, coming in 2 second after him. The guy behind me, finished 1 second behind me. In the chute handing our racing tags, the guy behind me(Matt Matzek)congratulated me on the kick at the end. I complimented him likewise… the spectator who warned me about him gave me enough motivation to give it all at the end. The best thing about beating him was that he’s in my age group! The guy whose aura I borrowed and allowed me to have a strong finish wasn’t too far behind. His name was Keith Hall and I thanked him profusely for helping me back out on the course. Had he not given me those words of encouragement… I wouldn’t have finished as strongly.

Calhoun’s is one of the races were you KNOW you want to stay after the race. Typically, on these longer races, I just leave because I know that I am not getting any hardware at the awards, so I just get in the car and go. Well, I was staying for the food though! A while back, I wrote about 5 weird things about me and #5 was that while running… anything is fair game in terms of food. Case in point… I got myself an Onion bagel, honey flavored cream cheese, granola and a little orange juice and decaf coffee. How I would eat the bagel is I would dip it in the cream cheese and then dip it into the granola. Kind of strange, I guess, but delicious!

Here is a picture of Marty (aka Beer Boy) in Blue and myself in Yellow. If you notice, I am hovering over the ground: 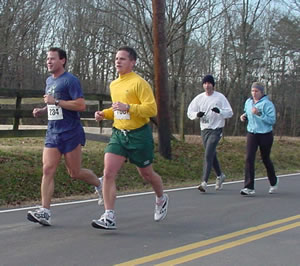 Marathoner, A Terry of all trades
View all posts by planet3rry →
This entry was posted in Life In General. Bookmark the permalink.