One thing that I have meaning to blog on was an event that occurred on Thanksgiving more in the preparation stages for our Thanksgiving Feast. The menu for the day was:
Ham (it was precooked & seasoned – so only needed to be heated)
Stuffing (Homemade recipe from Solange)
Greenbean Casserole (My favorite, will do about anything for Greenbean Casserole)
Homemade Dinner Rolls (Recipe that my Mom used while I was growing up)
Cranberry Sauce(Chris’s recipe: Ocean Spray from a can)
Rice (Brown Rice, nothing fancy, well it was Organic)
Pumpkin Pie(Chris’s recipe: box of pie from Wal-mart)

So, I was in charge of Kitchen Management, the Ham and the Dinner Rolls. I had made the Roll dough the night before so, I just had to let it rise before baking them to ensure hot delicious butter melting dinner rolls, those would be last. The driver for everything was the Ham, it would need about 90 minutes to warm up and so it was the time hog. Everything else could be made and baked before the ham was ready, especially the cranberry sauce.

One of the nice things about our kitchen is that it has a double oven. It is a pure luxury and if you have ever had a double oven, you’ll always want one. The plan was to cook the ham in the bottom oven, currently a holding area for cookie sheets and other metal pans while the other stuff cooked up top. Maximize everything so that it would be ready by about 1pm.

So I emptied the bottom oven and cranked it to 325 and went on doing some other things while it preheated. The Ham was covered in Aluminum foil in a broiler pan (the part that went with the Terry Hand Grater) and was ready to be tossed into the over and forgotten for 90 minutes. While running around the house, I do remember smelling something that didn’t seem quite right, but ignored it.

So now the oven was ready for the ham and as I opened up the oven door, some thick black stinky smoke billowed out of the oven. WTF! I quickly shut the door, a little shocked that the oven had belched out such a horrific substance. I peeked again and sure enough, the oven door was open a little more than an inch and the smoke was pouring out. I immediately turned off the oven and told Jen that “We had a Crisis”. In super panic mode, I had Jen get Ryan out of the kitchen and outside. I opened windows on both ends of the kitchen. I hoped that a breeze would carry the black smoke out of kitchen and not set off the house fire alarm. I ran downstairs to get a stand fan first before getting the small vacuum cleaner. The fan was to dissipate the smoke and the vacuum cleaner was to filter out some of the smoke so I could see inside.

I vacuumed for a couple of minutes and the smoke was still coming out pretty strong. I noticed that the small vent at the top of the oven was steady kicking out a stream of smoke. I then thought that it would be best to open it up halfway to see inside, if the house fire alarm went off, I’d have to cut the entire power to the house, but so be it. When I looked in the first time I only saw smoke. The second time with vacuum in hand, I saw some orange flames in the back of the oven right near where the element connects to the stove. Oh crap! An electrical fire.

I could have made the Olympic Hurdles getting to the fuse box. I cut the corners and jumped over a few obstacles with the ease of a bounding deer. I cut the power and went to go get the flour. If I had left the oven door closed, the fire would have, in all probability went out by itself due to a lack of oxygen. It was not an electrical fire, but I didn’t know that at the time. So, here I am with bunch of flour ready to catapult at the flames in hopes of snuffing the flames. In my first attempt, I got over half the fire. To minimize the amount of smoke, I instrumented a open, toss, close method and using this method there is little aim and no accuracy. The second toss killed the flame I was able to look, finally at the oven. Apart from being all black from soot, it looked okay.. after all where better to have a fire than the oven? Okay, maybe the fireplace!

The stand fan did a good job of getting rid of the smoke, but now I wanted to clean up the flour all over the oven. I scooped most of it out and then used the vacuum to get the smaller stuff. When I came to cleaning up the back of the oven where the flames where, a large burned mass broke off the oven floor. I initially thought it was a Flour Hybrid creation fashioned from the fire, but it was in fact the culprit.

Apparently, a knife (not one of ours) had been placed in with the broiler pans, cookie sheets, etc and when I took them out, fell onto the element. Then during preheating, caught on fire and made the mess. Here is a picture of what we found: 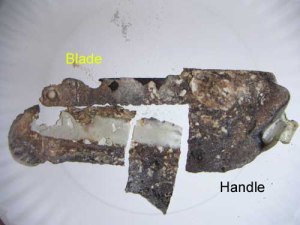 To date, I have wiped down the oven but not cleaned it thoroughly yet. I do not know the status of the element, but I am leaning to the fact that it should be okay. The top oven turned out to be just fine and instead of heating the ham in the oven, we tossed it into our 6 qt crock pot and cooked it for 3 hours on high. It was actually a little tall initially for the pot so we ended up hacking the top part of the ham. Of course, I had to cut and rip out the ham bone first… and that was hard and it was work.

Needless to say, Thanksgiving turned out just fine. Everyone ate and was happy.

Marathoner, A Terry of all trades
View all posts by planet3rry →
This entry was posted in Life In General and tagged oven fire, thanksgiving. Bookmark the permalink.